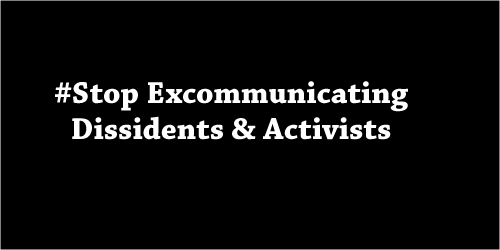 Jesus did not excommunicate Judas, even though he knew he would betray him to be murdered. The excommunication of the September Six and countless other dissidents in the LDS church is among the greatest causes of division.  When we as a church excommunicate those with strong dissenting opinion we crucify Christ afresh (Heb 6:6). This cult-like behavior only restricts and shows the inadequacy of our own priesthood. Strong differences of opinion are an opportunity for leadership to show their superior wisdom. Excommunication simply shows members that the priesthood lacks the superior wisdom needed to harmonize the difference of opinion or false conception. D&C 42:20–28 and D&C 102 delineate that excommunication must follow an accusation of breaking major moral commandments (see Alma 1:17).

Having channels for willing group secession when differences of opinion cannot be reconciled (and later re-absorption) is subtly taught in the LDS temple endowment as the order of heaven. Nearly all popular religion, nations and scientific breakthroughs are started by ego filled humans who are influenced by both good/unselfish and bad/selfish forces to branch off from the mainstream. Whether it be Peter or Paul, Joseph Smith, John Calvin, Martin Luther or John Wesley– reformers and apostates need to be free to create offshoots and righteous branches. It is a dangerous practice for priesthood hierarchy to reject these stones (Matt 21:42). It is not the place of Church hierarchy to use their “position, power or influence” to prevent branches of thought. It is their job to maintain the unity of the faith (Eph 4:11–14) through loving & Christ-like wisdom & persuasion (D&C 121). We might take a lesson from the academic community which has learned how to deal with rogue ideas; dissident thought is not forcefully expelled by the institution, but combatted with truth and evidence. (Even wrongly sometimes, but eventually truth prevails!) We should follow the examples of the scientific community, which has learned branches of thought are healthy to the pursuit of truth, even if they come across a bit antagonistic. They do not need to be shunned or thrown out, because consensus will eventually prove whose views “have God’s Spirit” or are best at describing and mimicking God and his natural law (Acts 5:38–39).

An effective method of dealing with these issues can come from an understanding of the way the “lower” and “higher” priesthoods work in heaven. (see this article)

Create a process where apostates or reformers are allowed to gain converts and form their own church “branches”, schools of thought/monasteries or congregations. By the same process, these groups need an avenue to be reabsorbed or grafted back into the mother church’s priesthood structure, once the leaders have achieved their dissenting egoic desires to lead others according to their own understanding. Almost like a combination and harmonization of Catholic & Protestant Christian systems. A rigid “by ordination only” Catholic-like priesthood and hierarchical structure exists, but a “self-ordained” or ordination by the Spirit system is also allowed. The travelling twelve constantly and actively court these “priesthood of all believers” types systems for reabsorption back into the central communion.

Go to facebook page
Join our Facebook Community
Emphasize that ordinances are symbols, not ends of themselves