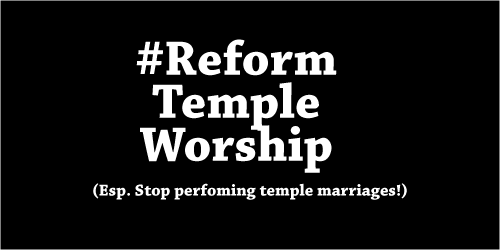 Reform institutionalized temple worship. Especially stopping temple weddings. (This came to me very strongly.) Sealings and endowments should not be performed until an initiate is ready to graduate from the lower preparatory law of carnal commandments (administered by the Aaronic/Ward Priesthood) to the higher and freer law of Christ & love later in life (administered by the Melchezidek/Stake priesthood). See reform #Teach The Higher Law for details. Reforms need to be made in accordance to the revelations of the coming modern Messianic Jewish prophets such as Jachanan Ben Kathryn (see Chapters 48-60).  The current “assembly line” system of pressuring young adults into temple initiation, covenant making & endowment all at young ages before marriage without even knowing beforehand the full idea of what covenants they will be making, can be highly detrimental and should be reformed as quickly as possible. (although most of these reforms likely won’t happen until the coming purge of the church)

18 The power and authority of the higher, or Melchizedek Priesthood, is to hold the keys of all the spiritual blessings of the church—

19 To have the privilege of receiving the mysteries of the kingdom of heaven, to have the heavens opened unto them, to commune with the general assembly and church of the Firstborn, and to enjoy the communion and presence of God the Father, and Jesus the mediator of the new covenant.

20 The power and authority of the lesser, or Aaronic Priesthood, is to hold the keys of the ministering of angels, and to administer in outward ordinances, the letter of the gospel, the baptism of repentance for the remission of sins, agreeable to the covenants and commandments. (D&C 107:18–20)

Simply put, the LDS temple rites have been corrupted into an assembly-line ritual. Take a number, and “next“….

The temples will soon be the location where the church communes with the “general assembly of the first born” or heavenly church.  This will and cannot happen until we radically reform our hearts, our doctrines, and our church in general. (The Book Oahspe explains in detail how this has worked in past dispensations, and will work in the coming dispensation).

The temple is meant to be highly esoteric and mystical. Shortly after the coming harvest, “tribulation of Israel” in Mathew 24, restoration of the Jewish Temple (70+ years from now) and accompanying changes in the earth’s magnetic field the temple will be a place where visible communion with spirit emissaries of the Heavenly Church occurs regularly within the Prayer Circle. (Which should actually be formed in the shape of a horseshoe magnet — NOT a circle — in order to provide the needed materialization energy for the visiting Spirits to be visible to all those in the room.)

Spiritual initiation literally leads a person through the symbolic and literal veils, so they can commune with the spirit world. The key in this process is desire.  The candidate must desire initiation or no change in consciousness can occur.  The current system places social pressure for people to go through the temple to be married  & “initiated” when, in many cases, they couldn’t care less about the outcome. The current system is no better than a club, and no different than the base aspect of our religion itself.

Initiation should not be done assembly-line style at 14 or 19 before a mission, but instead it should be a completely a personal matter which happens in small steps over the years. Like a Buddhist system of apprentice/pupil and master/guide, an applicant should desire these spiritual rituals and seek them out without social pressure. They should be assigned a permanent escort who has proven they “see” the truth behind the symbolism. The apprentice should interview with parents (according to the patriarchal order) as well as with Bishops (for the first two step of baptism & initiation in the first two levels of the temple), and then Stake Presidents (for the last two step of endowment & sealing in the upper two levels). Each applicant or apprentice should have specific “masters” and these adepts should be the temple escorts who guide them through the initiation process. There should not be set “interview” questions but an open discussion where each applicant’s understanding & readiness (not so much “worthiness”—as we are all unworthy) is assessed. If they grasp through word & deed the spiritual meaning behind each ordinance, they are ready to receive the spiritual ordinance. Once an adult is a high priest there should be no “readiness” discussion at all. If members are “unworthy” let them be accused according to the system given in D&C 102.

Once initiation has taken place, candidates can enter a school of the prophets in the instruction rooms of the temple. Here they learn to hone spiritual gifts such as the gift of prophecy, gift of revelation, gift of healing, power of group consciousness/true order of prayer, mediumship, this includes communion with the righteous dead through the veil.

Used properly, the temple ceremony is meant to teach mature members the true order of the priesthood (patriarchal order), the true order of prayer (group consciousness), and the true order of organized religion (as a lower man-made law pointing to the higher natural law). Practiced effectively, it will keep mature spiritualists from apostatizing, withdrawing or going inactive from church participation. It is meant to be a personal experience where those who “see”, lead those who are blind. The current system is broken. It is the blind leading the blind. It needs work.

Reform the teachings and strictures concerning sexuality, health and substance...
Scroll to top