You are here: Home1 / Humor 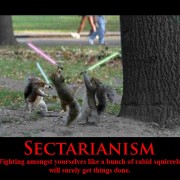 I was walking across a bridge one day, and I saw a man standing on the edge, about to jump off. So I ran over and said “Stop! don’t do it!”

Are you christian or Buddhist?” He said, “Christian.” I said, “Me too!

Are you catholic or protestant?” He said, “Protestant.” I said, “Me too!

Are you Episcopalian or baptist?” He said, “Baptist!” I said,”Wow! Me too!

It’s funny that most LDS people think this is funny and that it only applies to the sectarian world of Christianity.  But are we any different?  Haven’t we become just another sectarian Christian religion claiming to be the one and only true church, while at the same time pridefully belittling other sects because they are not “true”.  See What is Truth
END_OF_DOCUMENT_TOKEN_TO_BE_REPLACED 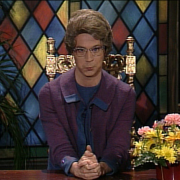 I’m in desperate need of your help! You see, I’m relatively new to the church and my Bishop just asked me to offer the prayer this Sunday in Sacrament Meeting. I’m nervous beyond belief! It seems like every member of the church offers such beautiful prayers, and I know that mine don’t sound nearly so spiritual!

Could you help me deliver some spiritual oomph during my prayer this Sunday?

What an excellent topic! Of course, the most spiritual way of praying is by using the Church’s approved method! However, as you’ve discovered, being in front of the whole congregation can be daunting. You’ll want to appear as righteous on the outside as you are on the inside! Here are a few pointers–some of my favorite ways to sound as spiritual as you should.

1. Believe it or not, you can be spiritual before you say a single word! Once you’re at the podium, close your eyes and fold your arms (the Church Approved Prayer Position), but don’t begin praying right away! Stay silent for 5 to 10 seconds before taking a deep, spiritual breath and then begin. This will show the congregation how earnest you are!

2. Make sure you have a sufficient number of adjectives describing our Heavenly Father. Choose any between Dear, Kind, and Gracious. Or, if you’re feeling extra spiritual, use all three!

4. You’d be amazed at how much more spiritual you’ll sound by praying as you normally do, while including simple phrases every so often. Make sure to begin sentences with, “At this time.” Make an effort to intermittently re-address God in the middle of your sentences. Be certain to say “this day” instead of “today.” When speaking of the Prophet, always specify which one by using the word “even.” Here’s an example sentence: “At this time, Lord, we thank thee for this day, and pray, Lord, that thou might bless our Prophet, even Thomas S. Monson.” So spiritual!

5. Of course, no prayer is complete without the classics:
– pray for those not in attendance that they’ll be there next week,
– bless the food to nourish and strengthen our bodies, and
– ask that all may travel in safety, and that no harm nor accident will come upon them.

6. Whether you’re thankful for it or asking God to bless us with it, always make sure to include moisture in your prayers!

7. Finally, make sure you say your closing words slowly, and you’ll come across as even more earnest in your petitions. Here’s a pro tip: to lengthen your closing even further, use “even,” just as before. “We say these things in the name of our Savior, even Jesus Christ, amen.”

Follow these simple steps, Mary, and you’ll sound so spiritual they’ll be begging you to pray in the future!

P.S. Thanksgiving is coming up! Don’t miss the rare opportunity you’ll have to be thankful for “the great bounty” you’ve received! So spiritual! 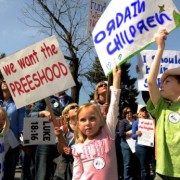 SALT LAKE CITY — Another group protesting for ordination was turned away from General Conference over the weekend: not Ordain Women, but Ordain Children.

The group is composed of more than two hundred children ages four to eleven. Six-year-old Timmy Johnson of the Bountiful 8th Ward leads the group. His mother whispered in his ear as he released this statement:

“I know that children can have the priesthood. I know Jesus loves kids more than grown-ups. I love my mother and father and sisters and brothers and dogs. Nameofjesuschristamen.”

Many have struggled to understand the demands of the group as well as read their signs.

The Church responded to the protest with this statement:

“The children weren’t turned away from conference, we asked them where their parents were and they ran away. One child was crying because he got on the wrong bus coming home from a field trip.”

Critics of the Ordain Children movement claim that children are unfit for the Priesthood because of their age. Aiden Ramsey, Ordain Children supporter and Johnson’s playmate, considers this “not fair” and thinks adults need to learn to share.

Some proponents, however, claim there is both doctrinal and scriptural evidence for the Ordain Children movement.

“Noah, Mormon, and Samuel were all ordained before twelve years of age,” explains Troy Roberts, a leader of the Mormon Association for the Advancement of Child Priesthood (MAACP). “I just think it’s terrible that there are no children on any of the church’s general boards. I mean, kids don’t even participate in ward council. Didn’t Jesus say, ‘Suffer the little children to come unto me, for of such is the kingdom of heaven?’ How can you have a kingdom of little children without letting children have the Priesthood?” 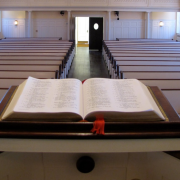 A narrative from the pages of Dialogue:A Journal of Mormon Thought: (minor edits by me)
See https://mormonuniversalism.com/5922/scriptural-commentary-on-only-true-church-doctrine/

“Well, the Book of Mormon says it was a place where the Zoramites stood to worship and pray.”

“But my church teacher said it was a tower that evil people used.”

“I can see how someone could think that. The Book of Mormon says the people who used it were wicked and perverse.”

“What made them wicked?”

“It says they were lifted up in pride and boasting and their hearts were set on getting rich. It seems like the Rameumptom and their religious tradition were mainly really prideful.  In fact the Rameumptom was a place for standing which was high above the head’ and only one person at a time could go up there.”

“Was it like the speaker’s stand in the church?”

“A speaker’s stand? You mean a pulpit? Well maybe, I suppose it was. In fact, the word ‘Rameumptom’ means ‘the holy stand.'”

“What’s so evil about a holy stand, Dad?”

“Well, it wasn’t the stand that was evil. It was how it was used. The people gathered there in their synagogue. . .”

“Just a different word for chapel or church.”

“They’d gather in their synagogue one day a week.”

“It must have been Sunday.”

“Because Sunday is the Lord’s day.”

“Well, maybe it was. . . Anyway, they’d gather there and whoever wanted to worship would go and stand on the top of the Rameumptom.”

“Could anyone go up there?”

“Well, no, that was part of the problem. Apparently, they had to wear the right clothes. . . ”

“You mean like us when we wear Sunday clothes, Dad?”

“Well, not exactly, but in a way, yes, I suppose. Some of us might have a hard time accepting certain kinds of clothes or people in sacrament meeting. But we wear our Sunday clothes to help us be reverent, don’t we?”

“Yes, they would go up and worship God by thanking him for making them so special.”

“Were they bearing their testimonies?”

“Well, uh, I guess maybe they were in a way, but they weren’t true testimonies.”

“Because they were too proud.”

“Well, they would talk about how they were ‘a chosen and holy people.'”

“My Primary teacher said Mormons are the chosen people and we’re a special generation.”

“Besides they were very, very proud about how much better they were than everyone else, because they didn’t believe the ‘foolish traditions’ of their neighbors.”

“What does that mean, Dad?”

“It means that they believed everyone else was wrong and they alone were right.”

“Isn’t that what we believe?”

“Because we are right, honey.”

“Everyone would stand and say the same thing. . .”

“Then after it was all over, they would go home and never speak about God until the next day of the Lord when they’d gather at the holy stand again.”

“No honey, we have Family Home Evening.”

“Dad, I still don’t see how they were that much different than us.