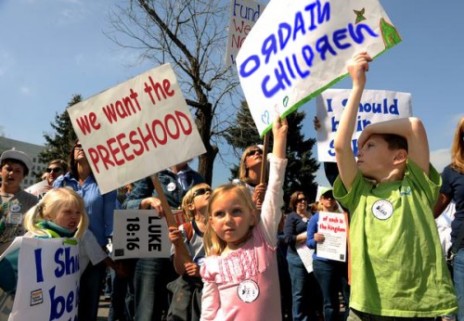 SALT LAKE CITY — Another group protesting for ordination was turned away from General Conference over the weekend: not Ordain Women, but Ordain Children.

The group is composed of more than two hundred children ages four to eleven. Six-year-old Timmy Johnson of the Bountiful 8th Ward leads the group. His mother whispered in his ear as he released this statement:

“I know that children can have the priesthood. I know Jesus loves kids more than grown-ups. I love my mother and father and sisters and brothers and dogs. Nameofjesuschristamen.”

Many have struggled to understand the demands of the group as well as read their signs.

The Church responded to the protest with this statement:

“The children weren’t turned away from conference, we asked them where their parents were and they ran away. One child was crying because he got on the wrong bus coming home from a field trip.”

Critics of the Ordain Children movement claim that children are unfit for the Priesthood because of their age. Aiden Ramsey, Ordain Children supporter and Johnson’s playmate, considers this “not fair” and thinks adults need to learn to share.

Some proponents, however, claim there is both doctrinal and scriptural evidence for the Ordain Children movement.

“Noah, Mormon, and Samuel were all ordained before twelve years of age,” explains Troy Roberts, a leader of the Mormon Association for the Advancement of Child Priesthood (MAACP). “I just think it’s terrible that there are no children on any of the church’s general boards. I mean, kids don’t even participate in ward council. Didn’t Jesus say, ‘Suffer the little children to come unto me, for of such is the kingdom of heaven?’ How can you have a kingdom of little children without letting children have the Priesthood?”

Ask Sister Christensen: How Can I Make My Prayers More Powerful?
Scroll to top