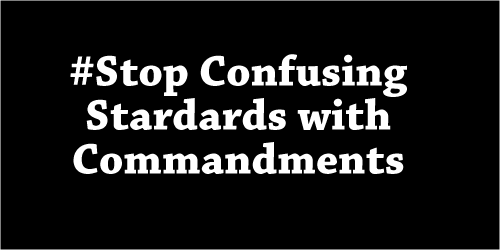 Greatly reform the teachings and strictures concerning sexuality, health and substance abuse in the Church by being more clear between the “commandments” (governed by the Aaronic Priesthood) of the lower law — and standards (epitomized by Christ & His perfect Character) of the higher/Melchezidek law. We need to be more careful not to add or takeaway from the commandments, like the Pharisees of old. Leave the specifics to the patriarchal order where they belong.

68 Whosoever declareth more or less than this, the same is not of me, but is against me; therefore he is not of my church.

The Church has confused the important differentiation between a “standard” and a “commandment”.  A standard is a suggestion. It is goal or ideal toward which all are encouraged to strive. In the Gospel our standard is to attain the Perfect character of our example Jesus Christ (D&C 92:12). Creating high standards is good for society and good for individuals. But our church has changed religious moral standards into commandments which manipulate, enslave and divide the church more than perhaps any other aspect of our theology.

One classic example is the Word of Wisdom. This standard was specifically commanded not to be given to the saints by “by commandment or constraint.” (D&C 89:2)  However, church leaders “declared more or less” than the revelation and turned the standard into a commandment much like the Pharisees did to the Mosaic Law in Christ’s day. They even pushed this standard onto mature members of the Higher Priesthood who should not be governed by lower law of Carnal commandments anyway–but by divine principle and Jesus example (D&C 84:18. See reform ‘Teach the Higher Law’), fully disregarding Christ & Paul’s words.

The Son of Man has come eating and drinking, and you say, ‘Behold, a gluttonous man and a drunkard, a friend of tax collectors and sinners!’ (Luke 7:34)

God’s kingdom does not consist of what a person eats or drinks. Rather, God’s kingdom consists of God’s approval and peace, as well as the joy that the Holy Spirit gives. (Romans 14:17)

Outside of the abolished Mosaic law, neither Christ nor the scriptures gave many commandments for sexuality either. In fact, there are basically two– Do not lust and do not commit adultery. (We must remember that Christ did away with the Mosaic Law, those able to live the higher law are no longer bound by the strictures of the old covenant.) In contrast, in the church today there are simply too many distorted principles concerning LDS morality and cultural strictures which appear to be more “commandments of men” which have “added to” and “taken away” from God’s law (Deut 4:2, D&C 10:68, read JST Col 2:21-22, NLT Col 2:21-22, Mark 7:7–8, JS-H 1:19 ). Just as occurred with the Catholic Medieval church, the suggestions and standards have become commandments because of our over-centralization of authority, and our beliefs that the “brethren” can establish commandments instead of simple non-doctrinal standards under the law of common voice & common consent.

Contrary to God’s law or standard, we are too often “commanded in all things” (which is why so many consider us a cult… we act too much like Jews who haven’t been redeemed from the old covenant by Christ). The Church hand-book of instruction has created an environment of commandment dictating every aspect of the average church members lives. Words of Wisdom have become commandment (D&C 89:2, 28:4-5). Our youth worthiness interviews and temple recommend interview process have “added to” God’s commandments in virtually every aspect of members lives, from our food, our dress, our income, to the minutia of our sexuality. As non-binding standards these suggestions on living can be good for society, but only if they are not pushed as the will of God or something that makes individuals feel spiritually damned for “transgressing”.

Our law of Chastity is another example of “adding and taking away” from scripture by creating a Pharisee-like system of commandments in lieu of a standard.

[I need to fully rewrite the following sections to flesh out the concepts I’m getting out].  Parents and those under the Aaronic (local leaders) priesthood have every right to make whatever rules they feel will guide their sheep.  This is the purpose of the lower priesthood and the ward/parish level.  But at some point every disciple is to graduate to the higher law of Christ. These are no longer bound by the lower laws. If they live them, they do so in sacrifice just to show a good example.  But their salvation and church standing are detached from obeying the commandments of the lower law. ie. “All things are lawful for me, but all things are not expedient: all things are lawful for me, but all things edify not. — 1 Cor 10:23”]

There is very, very little by way of specific commandments concerning these topics in the scriptures for a reason. Even the ten commandment’s simply say “Thou shalt not commit adultery.”  Not even the Mosaic law gave harsh penalties to sex out of wedlock, and it was in most cases far more strict than the law Christ replaced it with.  Scripture clearly calls sex out of wedlock sin, but to make it into a “sin next to murder” as Mormonism has, is drive the millions of youth who experiment with premarital sex away from God. (see the article The Sin Next to Murder)  The specifics of how to be sexually “chaste” or physically healthy are highly personal and difficult to define with blanket prohibitions (see this article on moral purity). Much like dietary fads, cultural religious proscription on sexuality rarely take into account the uniqueness of each individual’s different physical background and spiritual makeup. Priesthood overreach has caused many “words of wisdom” to become strictures, dogma, and commandments. Unwisely “adding to and taking away from” the standards of righteousness God has given to men. God’s loving standard has been made into a self-righteous burden.

Only very generalized dietary guidelines of balance can be made to apply to both a 350 lb Samoan and a 90 lb Tibetan. Likewise only very generalized guidelines of sexuality can be made to apply to individuals along the diverse spectrum of human sexuality and passion. It is unreasonable and unrighteous to create overly-specific and idealistic strictures concerning masturbation, self-stimulation, gender identity, minutiae in sexual media consumption, kissing, dress and many aspects of sex (again, standards are good for society, strictures are highly divisive). To take God’s name and draw a line which says if you do X, you are righteous and approved by God but if you do Y, you are wicked and condemned by God is the most solemn and awful of responsibilities. Any individual who does this becomes karmically responsibility for those they make to feel evil and demonized. There are far too many who leave the church because the churches blanket prescriptions on sexual practice are unreasonable and demonizing because they often are. When they realize how unreasonable they are… they then lose faith in God because how could “god” make a commandment that they are literally incapable of keeping?  When in truth it wasn’t god, it was a man unjustly using god’s name to make a needed social standard into a divine commandment. In the Sermon on the Mount, Christ himself chastised Israel for turning the trivial standards and minutia of the Mosaic “law” into divine commandments.

Almost universally, everyone understands that cheating on a committed relationship (adultery) is wrong–this is why it is specifically forbidden in scripture. God didn’t just write this law on stone, he wrote it in the human heart. Everyone is capable of keeping this divine law which is written in human conscience by God. But nothing is said in scripture of dating, kissing, masturbation for a reason, and little is said of fornication for the same reason—because the “rightness or wrongness” of these things is complex. God’s goal is the happiness of each individual—and when religious prohibitions & demonization cause more pain than the personal & social consequences of the “sin” itself, then you know something is wrong. “Sin” is by definition a thing which has negative or destructive consequences for an individual and society, and strictures tend to befuddle that principle and turn people into pharisees who call good evil and evil good.

Whenever possible, specific regulations should be withheld in lieu of words of wisdom which point to “scientific” studies and examples which teach people which actions most often lead to which consequences without generalizing, demonizing or spiritualizing the matter. Avoiding as much as possible taking the name of God in vain. (wrongly speaking by God’s authority.)

Continue to greatly reform the for strength of youth pamphlet to teach principles and not proscriptions. Standards, not commandments.  Great division comes from trying to “add” to the scriptures or law on matters of sexual morality. Great evil comes from demonizing sexuality. It is better to teach people how to pray and how to listen to their heart and mind (emotions and logic) on details of sexual morality. Hold up the standard, which is healthy lasting marriage between a husband and wife, but be more careful about telling people how to achieve that standard. Never insinuate a person is “evil” for inability or lack of desire to live the standard. Focus on what is right and desired, instead on what is wrong, bad or “contrary to God’s will”.

Sexual morality should be handled locally. First by parents, then by Bishops/Stake Presidents, and seldom by General Authorities. Give correct “principles” (not rules) and let people govern themselves. Create and sustain forums where parents can get and exchange information. Religious dogma and over-controlling strictures surrounding sexual morality and the Word of Wisdom are in my estimation among the number one reason for apostasy and division. Members have not been allowed to follow the Spirit in this highly personal issue because of the priesthood overstepping its bounds. Youth are inundated with rules and individually unrealistic standards but rarely actually get taught meaningful information about human sexuality. Demonizing human sexuality in any degree is the surest way to divide & destroy the Church. As warned in D&C 121, it creates many “anti-Mormons” who esteem the church “as their enemy” (D&C 121:43), as well as creating a class of religiously active hypocrites and self-righteous sycophants. (This author was one of them… thinking he was so much ‘more righteous’ than those he knew who had sex before marriage.)

Given the information we have on Joseph Smith’s sexual difficulties and the law of Polygamy given to the saints (because they wanted it), the current proscriptive tenets which rule LDS sexuality are completely hypocritical, contradictory and idolatrous.

-use the patriarchal order as much as possible in matters of legalism and discipline.