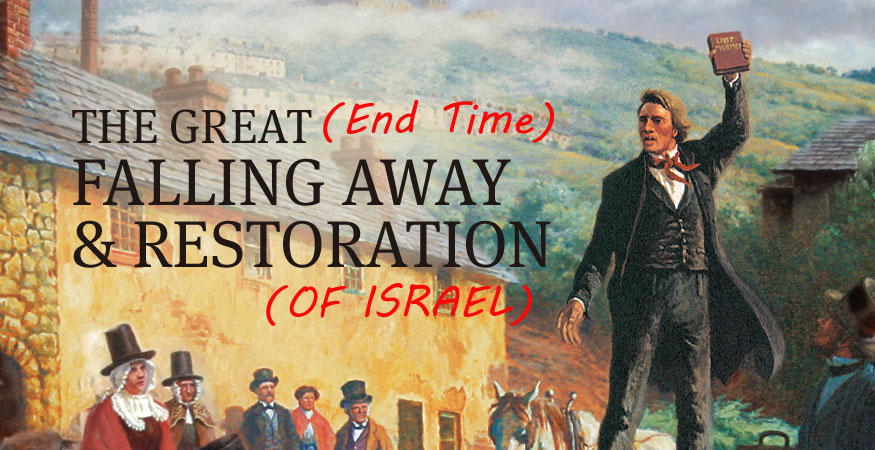 In this article I hope to unravel some of the contradiction found it the current LDS perspective on the “Great Apostasy“, which I believe is for the most part a popular protestant view adopted by church leaders during Joseph Smith’s time. Instead of ‘great’ or universal apostasy, LDS scriptures seem to support a dispensationalist view of apostasy. In other words, at no time was there a world-wide or universal apostasy or loss of priesthood and truth. Instead God simply took those things from one people, and gave them to another. Despite their wickedness God allowed ‘Israel’ to be his ‘church’ or archetype of how heaven operates to the world from Abraham to Christ. After Christ, Israel fell into apostasy as the gospel and job of being Jehovah’s church or archetype passed to the Gentiles and Catholic Church. Joseph Smith’s ‘restoration’ heralds the message that the priesthood and truth is about to be taken from the gentiles (as they fall into apostasy) and given back to gathered Israel (Middle Eastern & Latin peoples). Under their new leadership, the neo Christianity will then unite Islam, Old Christianity, Buddhism, Hinduism & Traditional Chinese religion too. In the end, the renewal of the covenant and religious priesthood keys, is part of a repeated pattern wherein Israel’s “God” or the “heavenly church” takes turns establishing new covenants and symbolic systems with each of the world’s peoples at assorted key times and seasons of human history. (And has nothing to do with truth, priesthood, the gospel or church being taken completely from the earth.)

The Great Apostasy doctrine was conceived by 16th century reformers like Martin Luther, John Calvin, Thomas Cranmer, John Thomas, John Knox, and Cotton Mather. It is a necessary pillar in the protestant idea of the universal priesthood of all believers, and was used to justify the protestant view of salvation without need for Catholic priesthood or apostolic succession. For early Mormon’s the doctrine was seen as an effective backdrop to show a need for priesthood restoration and exclusivity claims. However, I hope to show how adopting this doctrine has caused us to misinterpret the Bible and modern scripture and actually weaken the LDS position. It causes many to lose faith in the WEAK, illogical, contradictory and inconsistent ‘God’ that this doctrine requires. As an example I offer the following logical contradictions and inconsistencies that are caused by mixing the idea of Universal Apostasy with LDS theology.

I believe these issues come from a fundamentalist interpretation of restorationism, history and scripture. Instead of seeing Biblical prophets as religious archetypes and messengers of a heavenly church, and seeing the Israelite and Christian priesthood covenants as divinely created symbols or shadows of what heaven is planning for the whole of society; fundamentalist interpretations get caught up in narrow-minded and overly-literal scriptural interpretations that end up destroying faith in god and dividing groups and distorting the heavenly system they are supposedly meant to display to the world.

As a beginning proof of divinity’s guiding hand in both the history of Israel and the European Gentile Church (which includes protestant Christianity), I offer this comparison of the unbelievable symbolism, historical typology, and repeated patterns displayed in the histories of Israel and the Gentile Church. In this article I will attempt to show those patterns as proof of heaven’s influence on human affairs, as well as taking another look at the scriptures used to uphold the misunderstood doctrine of universal apostasy. (This historical dualism concept comes from the recently “revealed” Jewish revelation, The Book of Ben Kathryn — and is suggested to be the key to unraveling Daniel’s 70 weeks prophesy concerning the Restoration of Israel and end of the Times of the Gentiles)

Timeline summarizing the historical correlations or types between the times of Israel and the times of the Gentiles.  Note the similarities in the upper timeline (spanning from Abraham to Christ), and the lower timeline (spanning from Christ to present). The following section will show how each “age” or “time” followed a divinely guided blueprint in order to create a group capable of having the largest possible impact on human evolution and history.

People tend to find meaning and patterns in the strangest things. Apophenia, which is the human tendency to perceive meaningful patterns within random data, is something I’m all too aware of.  But as I’ve studied religious history over the last decade or so I have been amazed by the striking patterns and types that I myself (and thousands of others) have seen between the biblical narrative of Israel’s history and the Gentile Christian Dispensation. In my opinion, self fulfilling prophesy seems a far stretch to account for all the correlations. To begin with, as shown in the above diagram, both dispensations were started by a “King of Righteousness” known as a “Son of God” (Melchizedek vs. Christ). Both involved an early period of 12 closely related tribalistic factions. Both tribal groups were brought into special position and growth within a major southern global empire, only to later be enslaved by the arrangement (Joseph of Egypt vs Constantine of Rome). Both were freed from that arrangement about the same time that a spirit of legal codification swept the region. (The Mosaic code, with Hammurabi’s code and others matching with Justinian’s code, Sharia law and the host of legal codes which swept through the Germanic nations almost exactly 2000 years later.)

Both of these periods of codification (legal codes which strongly shaped the future of civilization) were accompanied by a type of imperial Holy War to help bring those legal codes to a larger populous. Joshua and Hammurabi’s conquest of the Holy Land and Mesopotamia corresponding to Belisarius’ and Muhammad’s conquest of the Mediterranean & Middle East (where Belisarius expanded the rising Christian Byzantine Empire to double its size). Just as Joshua’s conquest occurred nearly the same time as Babylon’s first major burst of expansionism, Belisuarius’ campaigns match very closely with the rapid growth of early Islam. The rise of Islam from Judaic & Christian roots in the 6th and 7th centuries AD, matching the raise of proto-Indo-Aryan religion out of Babylonian and Egyptian traditions 2000 years earlier. This indo-Aryan religion would go on to spread into Rome, Greece, Persia and India and was the base for the pantheons of Vedic/Hindu, Zoroastrian, Akkadian and Greek religions.

Each of these dispensations went through a centrally defining period of religious imperialism, where the religious leader began to anoint the emperor (Samuel anointing Saul in the case of Israel and Pope Leo II anointing Charlemagne in the case of the Gentile Church/Holy Roman Empire). Both of these religious empires shortly thereafter experienced a major schism. The division of the kingdom of Judah & Israel in the dispensation of Israel, and the Great East-West Schism which split the Roman & Eastern Orthodox Church. And not too long after that, both dispensations faced a radical destruction of their power and authority. Israel’s ‘Babylonian Captivity’ matching with the 70 year Avignon Papacy, called the ‘Babylonian Captivity of the popes’ by many. In both cases this destruction of power created a dissatisfaction with authoritarian/priesthood abuse and gave rise to a spirit of protestant or sectarianism. Ezra’s reforms matching those of Luther, where scripture was rewritten, translated and recanonized–accompanying fundamental shift in the way authority was viewed. In both cases this pluralistic religious sectarianism (called ‘Second Temple Sectarianism’ in Israel, or ‘schools’ by Josephus) seemed to accompany a similar spirit in the regional political arena where democracy and republics began to replace monarchies.

Also during this period, each dispensation went through a matching colonial phase where people from the region began to colonize the entire world. Although 15th-20th century European expansionism and colonialism is well known, fewer are aware of the massive Phoenician, Greek, Roman and Jewish colonial efforts which took place 2000 years earlier. Apart from the well known colonies of the Mediterranean, Britain, Scandinavia, Crimea, India and central Asian (Scythian) colonies, Mormon theology proposes that at least three distinct and influential colonies to non-eurasian continents or “isles of the sea” (2 Ne 10:21, Jacob 5) existed—suggesting that the Israel/Gentile Church pattern or analog may be even stronger than modern archaeology is willing to currently accept.

In my article Parallels between the Times of Israel and the Times of the Gentiles, I detail many additional types, patterns and parallels many of which are inevitably a product of confirmation bias, but given as a whole the correspondence is not easily dismissed. Indeed LDS and other restorationism scriptures are replete with allusions to the parallelism between dispensational ages. (see Ether 13:2–12, JS-Matt 1:32–33, 3 Ne 8, 2 Ne 21:1, D&C 113:3, Deut 8:15, Acts 3:22, 3 Ne 21:8–11, D&C 103:16, etc)  By comparing the dispensation of Israel with the dispensation of the Gentiles, we can see how a Universal Apostasy in either of these dispensations makes little sense given scriptural and historical accounts. I think these strong parallels and the doctrinal contradictions which they help clear up are a solid reason to take another look at the scriptures which we use to support the old protestant Great Apostasy doctrine promoted in modern LDS theology. I propose that just like throughout the Dispensation of Israel, priesthood continued in the Catholic Church throughout the Dispensation of the Gentiles. However, much like the forerunner John the Baptist, Joseph Smith was one of many restorationism mystics who felt “called” to announce the End of the Gentile Dispensation and its coming fall (its fullness), and the restoration of the Lord’s covenant to Israel.

Go to facebook page
Join our Facebook Community
My Testimony of the LDS Church & Religion (Part 2. My Beliefs)