Blog - Latest News
You are here: Home1 / Channeled Texts2 / Introduction to The Gospel of The Holy Twelve 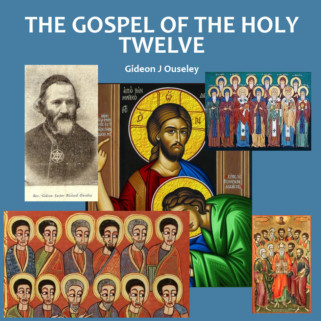 The Gospel of the Holy Twelve is a revalatory text, suggesting to be a restoration of the original gospel of christ.

This Gospel record is the recovered document from which the Four Gospels as we have them today were built upon. It was the first formulated life of the Christ and was written by St. John about the year 70 AD., when he was imprisoned in Rome and given page by page to one whom he could trust.

When the scroll was completed and after its contents had been made known to the Apostles, it was taken to Tibet by the same disciple, who left it in the care of a unnamed lama.

Mormonism, of course, has a number of scriptures that support the idea that assorted parts of the bible were corrupted through time, and that these corruptions would be corrected by new finds and revelations in the latter days.

Now this could be talking about the Old Testament as compiled by Ezra or it could be talking about the parts of the New Testament possibly compiled by John. Either way, Mormonism holds that the that the version of this bible that has been passed down to us through Roman era rabbinism and early catholicism has many plain and precious things taken out. Parts which may still exist in Tibeten libraries and other buried locations. Note this additional LDS scripture concerning the idea that John the beloved will help reveal additional distorted truths in the latter days…

25 But the things which thou shalt see hereafter thou shalt not write; for the Lord God hath ordained the apostle of the Lamb of God that he should write them…
26 And also others who have been, to them hath he shown all things, and they have written them; and they are sealed up to come forth in their purity, according to the truth which is in the Lamb, in the own due time of the Lord, unto the house of Israel.
27 And I, Nephi, heard and bear record, that the name of the apostle of the Lamb was John, according to the word of the angel.

So we learn in essence that the “in the due time of the Lord” we will get a “pure” or uncorrupted version of the Old Testament (Obviously this will occur when the Plates of Brass are given back to man, but I believe it is happening in part to those ready to receive by the restoration of these Tibetan versions). Furthermore we may get an uncorrupted version of the Book of Revelation written by John the Revelator. Is it possible that this too was sent to Tibet and is one of the “Rich Treasures [to be brought] unto the children of Ephraim” when “they who are in the north countries [sic] come in remembrance before the Lord; and their prophets [sic] hear his voice, and [sic] no longer stay themselves; and [sic] smite the rocks, and the ice [flows] down at their presence.” (D&C 133:26–30) [Read my article on the Lost Ten tribes in Tibet and Mongolia here -link]

Now I’m not so sure that the Gospel of the Holy Twelve is an uncorrupted original gospel. If fact, I tend to believe it a channeled text which introduces its own bias into the Gospels. But I think it may actually restore some great aspects of the Gospel of Christ, and that the original certainly could have been given to St John by revelation and sealed to be sent to Tibet with the Book of Revelation that they could come forth in purity during the Dispensation of the Fullness of Times. Furthermore, I speculate that the “mission and ordinance, for [John] to gather the tribes of Israel… and restore all things” spoken of in D&C 77:14 will be centered in bringing forth these records hidden in Israel, Tibet, Great Britain and the other locations where Israel was largely scattered. As an echoed witness to John’s mission we have these quote from the Doctrine & Covenants Church Manuals,

The Apostle John ministered to the Prophet Joseph Smith and Oliver Cowdery in 1829 when he assisted Peter and James in the restoration of the Melchizedek Priesthood (see D&C 27:12).

In a conference of the Church on 3 June 1831, the Prophet Joseph Smith taught concerning John’s ministry: “John the Revelator was then among the Ten Tribes of Israel who had been led away by Shalmaneser, king of Assyria, to prepare them for their return from their long dispersion” (History of the Church, 1:176).

In trying to get to the bottom of how the Gospel of the Holy Twelve got from its supposed residence in Tibet to England, The Christian Gospel Trust of Sussex writes that it remained in Tibet

“until a friar, named Placidus, visited the monastery in the eighteen seventies and asked if he might show it to the Church Authorities in Rome.

The scroll was then given to him and on the way home, which took a long time, he translated a portion of it into Latin and on his arrival in Rome read it to the assembled Cardinals. At first they were impressed, but as he proceeded to reveal the contents they realised that to make it known would discredit the Church which had, during the Council of Nicea, eliminated from the Gospels the Master’s teaching about the love and care of animals and about abstaining from eating flesh-foods. And so the scroll was hidden away in the archives of the Vatican, where it remains to this day”

I don’t think that this story is a total fabrication, but one does wonder how it fits into another preface written in another version where supposedly Rev. Gideon Ouseley claims that the first publication of The Gospel of the Holy Twelve as written by him was communicated to him “in numerous fragments at different times, by Emmanuel Swedenborg, Anna Kingsford, Edward Maitland, and a priest of a former century giving his name as Placidus, of the Franciscan Order, afterward A. Carmelite”, who were the translators thereof. He also refers to certain “spiritual manifestations” which he says accompanied the transcription. So perhaps the story pieced together here is that it went from John to Tibet, to the Vatican where it has been since the 1800’s. But deceased seers including Emmanual Swedenborg translated the work from latin and revealed in to Gideon Ouseley in visions whereafter he wrote it down and published it. Sounds quite fantastic to me, but perhaps no more fantastic than the translation/revelation of the Book of Mormon or Pearl of Great Price.

It has become my practice to judge spiritual books by their content, not by the stories surrounding their coming forth.

To end, I will showcase some of the unique content found in the text….

In the following passage we have a list of the twelve apostles as well as the tribe of israel each represented. This is a Jewell of information lost to the new testament gospels but that I had been searching for for many years.

Now these are too inspired to be made up. Note that Judas “who was among them, but not one of them” was a Levite. Not to be counted just as the tribe of Levi in the apportioning of Israel to each tribe. Note also that John the beloved is of Ephraim… Of Course! I’ll let you chew on the rest. They are an absolute revelation.

Secondly, lets look at… I”ll complete this when I have some time…

Article under construction from this point.

In truth there are just too many deep wonderful principles to even do justice. Take the four-fold ministry for instance… (add quotes, see other article)..

However, the two doctrines that are suspect and may have been added by Buddhist/Tibetan scribes may be the parts on animal cruelty. But judge for yourself.

See my posts here (link) to see an explanation of what may appear to some to be a teaching on reincarnation (Christians would just call it resurrection).

Also a bit on marriage…. I’ll have to write an article on this because many texts (including Paul in the new testament) clarify the whole concept of their being a time to marry and a time to be celibate.