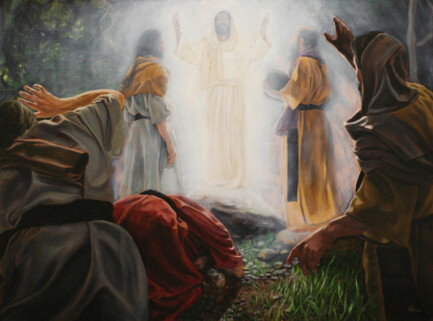 Transfigure: Trans=change, carry. Figure=form, image. Thus it is to change ones form, or in christian scripture to changed or resurrect from a lower form to a higher form while still in the physical body.

Translate: Trans=change, carry Late=over, slow, dead/death. In this sense, to translate is to carry over or be changed over. Death is a form of translation for the spirit, but in the LDS sense it means to be physically carried over the threshold of death WITH ones body.

So lets go into more depth on transfiguration first.
Christ was transfigured on the mount meaning he actually went through a spiritual “quickening” as he communed with being of higher planes. Nephi & Lehi also went through a similar process where their faces shown in brilliance while in prison as their spirits were changed from one plane to another so they could commune with the beings of that higher plane. Similarly, we are told Moses was transfigured before the Lord so he could behold his glory, as he says..

11 But now mine own eyes have beheld God; but not my natural, but my spiritual eyes, for my natural eyes could not have beheld; for I should have withered and died in his presence; but his glory was upon me; and I beheld his face, for I was transfigured before him.

What people need to remember is that people on higher planes/densities/dimensions/vibrations can see/travel to lower planes, but individuals of lower planes cannot see or travel to higher planes objectively (subjectively is another matter), without being changed to a similar plane/vibration themselves. Thus for God and man to commune, one of two things must happen. God must descend to the physical plane, covering his own glory with physical elements; or secondly man’s spirit must ascend or be “transfigured”; in which case God must cover man to hide him from his Glory, least mans spirit be consumed.

Thus In both the cases of God descending to man or man ascending to God a change must take place in one of the individuals so that; to the entity of the lower kingdom so that they can either endure the higher vibratoins of the higher sphere, or that they

Lets cover the second case first since it is much more common. In many instances, man’s “ascending to God” is symbolized by man being instructed to go, or being carried up to “an exceedingly high mountain”, or a temple (mount Zion) or some other sacred location to symbolize heaven or the higher spheres. Taking Moses for an example, he “called up to the top of the Mount”, and after ascending we are told that…

1 …Moses was caught up into an exceedingly high mountain,
2 And he saw God face to face, and he talked with him, and the glory of God was upon Moses; therefore Moses could endure his presence.

temporarily/permanently changed to a higher vibration so that they can “spiritually” behold things of (or travel to) the higher dimensions.

To treat the first way of communion first, we should remember that both gods and angels have descended in this fasion many times in the past as “some have entertained angels unawares” [Heb 13:2], or as Christ did at the sepulcher and on the road to Emmaus.) It was also likewise through this process that Christ appeared to the Nephites and to Joseph Smith. In these instances, when a God/Angel descends they control the density or thier cloak and thus how much light shines through. It was by this means that the resurrected Christ hid his identity from both Mary and on the Road to Emmaus, as it says… “their eyes were holden that they should not know him” (luke 24:16). do

Or secondly man’s spirit must be “transfigured” or temporarily/permanently changed to a higher vibration so that they can “spiritually” behold things of a higher dimension. As all spirits (both paradise/prison and our own spirits within our bodies) are composed of a more rarefied (lower density) matter/vibration than our physical bodies it is not possible for our physical eyes to see matter of that higher vibration. However, our spirit’s eyes can see matter of its own or higher vibrations with a little help. This is why Moses says his “natural (physical) eyes could not have beheld”, but his “spiritual eyes”. In other words God “quickened” (the vibrations of) his spirit so that his spirit could temporarily see matter (Gods body in this case) in/from a higher plane/dimension/vibration. Had another non-seer (non-spiritual seeing) mortal been standing next to Moses looking with their physical eyes, they would have seen nothing. Conversely had another seer (one with spiritual eyes to see) been standing there and been transfigured to see (lifted up spiritually to the higher plane) but not been transfigured (protected), they would have as Moses said “withered and died in his presence”.

As another evidence for

1 The words of God, which he spake unto Moses at a time when Moses was caught up into an exceedingly high mountain,
2 And he saw God face to face, and he talked with him, and the glory of God was upon Moses; therefore Moses could endure his presence.

*As a side note, demons have the ability to create a body/appear as an ‘angel of light’, but only in the dark or at night, since their light is dimmer than that of the sun. Also, since Satan is a being of a lower plane, he can be seen with “non-transfigured” spiritual eyes or even physical eyes, as Moses said,

13 And it came to pass that Moses looked upon Satan and said: …where is thy glory, that I should worship thee?
14 For behold, I could not look upon God, except his glory should come upon me, and I were transfigured before him. But I can look upon thee in the natural man. Is it not so, surely?
15 Blessed be the name of my God, for his Spirit hath not altogether withdrawn from me, or else where is thy glory, for it is darkness unto me? And I can judge between thee and God; …

Transfigurations are always dependent upon ones (spiritual) “eyes being opened”. As Paul says

As far as translation….

All must progress spiritually through the heavenly kingdoms passing from one threshold to another until they reach the veil before the Celestial Kingdom. Each ascension from one plane to another is termed a spiritual resurrection or “rising” by many, but should not be confused with the “physical” resurrection most of us associate with the term. Most people do the majority of this progressing after death, leaving one of the six “terrestial” spiritual planes and bodies for a higher, but one can actually do this progressing far faster while still on earth. On the mount of transfiguration, Christ’s body and spirit were changed to the highest spiritual plane before actually passing through the veil (bridge of chivot) into the etherean Celestial Kingdom and presence of the Father. A step which he did not accomplish until after his physical resurrection and ascension. Thus he says to marry “touch me not for I have not yet ascended unto my Father…”

Thus after his physical resurrection

36 And now behold, as I spake concerning those whom the Lord hath chosen, yea, even three who were caught up into the heavens, that I knew not whether they were cleansed from mortality to immortality—
37 But behold, since I wrote, I have inquired of the Lord, and he hath made it manifest unto me that there must needs be a change wrought upon their bodies, or else it needs be that they must taste of death;
38 Therefore, that they might not taste of death there was a change wrought upon their bodies, that they might not suffer pain nor sorrow save it were for the sins of the world.
39 Now this change was not equal to that which shall take place at the last day; but there was a change wrought upon them, insomuch that Satan could have no power over them, that he could not tempt them; and they were sanctified in the flesh, that they were holy, and that the powers of the earth could not hold them.
40 And in this state they were to remain until the judgment day of Christ; and at that day they were to receive a greater change, and to be received into the kingdom of the Father

D&C 88: 26, 28–32, 49, 96
26 Wherefore, it shall be sanctified; yea, notwithstanding it shall die, it shall be quickened again, and shall abide the power by which it is quickened, and the righteous shall inherit it.

96 And the saints that are upon the earth, who are alive, shall be quickened and be caught up to meet him.

Death… How to deal with it. 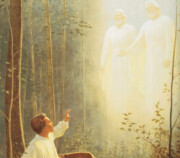 Seeing The Face of God…

Eternal Progression, Degrees of Glory, and the Resurrection: A Comparative Cosmology

More on the Resurrection

The Difference Between the Priesthood & Prophets
Scroll to top