link to this after main eternal progression article.

Your former picture is not so much correct; to picture the earth as the center between good and evil, heaven and hell; the water between earth and air if you will. This can possibly bring about an incorrect image of eternity (as it has in my case).

It is more correct to view things as follows. Good and evil, the light and darkness exist on all planes, even in Etherea or the celestial most rarified planes (as you would call it). But the farther in the rarified direction you move, the smaller the “distance” or contrast between the opposing forces, until at some point in the “upward” direction of density you arrive at a total oneness of existence. This is THE ONE TRUE GOD, completely outside of space and time and is entirely within the realm of faith. Conversely as you move toward grosser matter, the opposites become more largely polarized. Thus in earth there is stronger polarization than in the spirit world or terrestrial or celestial spheres.

As an individual or the earth ascends, he/it must leave behind the unrefined dross, or grosser fleshy matter if he is to ascend. Thus the righteous/ying is in ascension and the wicked/yang is in dissension. The righteous of the earth will ascend to the millennium which will be a less dense earth composed merely of the “ying” or “good” or “light” of the previous earth man left upon death. (The bad is left behind). However, during the millennium the good ying will further be divided and polarized starting the whole sorting process over. Does that make sense?

This is why you envisioned the earth without large polarization in its infancy and then the good and evil sides of the spirit world growing out from it through time. When the righteous people and earth ascend (are rarified together) they will be more homogenous and “one” than they were on earth. It could be said that they were not polarized (even though they were somewhat). But with time that subset will become just as polarized as they were with the wicked back on the previous earth in the previously cycle. Its like a group of nations that forget their differences because they have to unite when they are attacked by an “evil” super-power, but when that evil empire is conquered, they start squabbling with each-other, lose their unity and soon a subset of them becomes the next evil super power to repeat the cycle again.

I suppose the earth could be viewed as a battlefield standing between a good and evil spirit worlds since there are yet grosser “corporeal” world beneath earth (I think?) just as there are less dense “atmospherean” world above, and these dualities both have their influences on earth. But one should not picture the earth as standing between the hells and heavens of where departed spirits go. For ALL spirits upon death move to an atmospherean world which is less dense than (and therefore above) this earth. However, the righteous subset only (along with the earth itself eventually) ascend, while the wicked stagnate or descend. So you see, just as the righteous have to “wait” in heaven for their loved ones to die so they can be together eternally (in heaven), so also do all men “wait” in heaven for the earth itself to “die” so it’s “spirit” can raise to the SAME density as the righteous and they can live together for another cycle during the millennium wherein there will be birth and death (as desired) as well as materialization and translation. The wicked also will be reunited with their evil portion of the earth as it is “resurrected” into both the same and a lower density and becomes their abode whith both birth????

-So is the earth really only 4000ish years old since the flood, or is there truth to the big numbers and
-is ante-diluvium and millennial scriptural accounts the same world?

(so the God of this world is over both good and evil. You might say the father is god over both the Son/Christ and Satan. They are both his servants. And both of them can be subdivided into two as well. Christ into The Son & Holy Ghost, etc. etc. And Satan into the devil and the anti-christ. So your view that the demiurge dwells in a region of light is not quite true… HOW can he be in heaven? He visits there to recieve instruction from the father and he is a light/dark couple.. this is more complex than that. the devil is two in one, who are HIGHLY polarized. He is a schizofrenic. while before god’s throne he is an obedient servant doing what he thinks is right, self-righteously trying by fire. But while on earth he is a debaucherous devil. So it is with all the evil. they are bipolar. But the righteous are not so bipolar, not so polarized… they are moving upward toward unity. 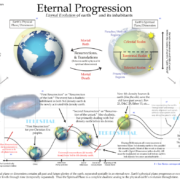 Eternal Progression, Degrees of Glory, and the Resurrection: A Comparative Cosmology

Difference between translation and transfiguration
Scroll to top