You are here: Home1 / consciousness 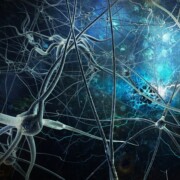 Oaspe gives a very unique and informative cosmology. One of the most intriguing aspects of this cosmology is the concept of Dan Times. These are periods of time (averaging 3000 years), in which the solar system in it’s galactic orbit makes a complete cycle from a place of high spiritual energy and enlightenment through a space of spiritual darkness or entropy, and back.

1. First, the earth plieth in a circuit around the sun, which circuit is divided into four arcs called spring, summer, autumn and winter.
2. Second, the sun, with his family, plieth in a large circuit [around a governing creation], which is divided into one thousand five hundred arcs [dan-has], the distance of which for each arc is about three thousand years or one [harvest] cycle.
3. During a cycle, the earth and her heavens fall in the spiritual (etherean) regions of hundreds of spiritual (etherean) worlds, where dwell Jehovah’s high-raised angels, whose Chiefs have to do with the management of worlds.
4. During the time of a cycle, the earth is therefore under the control and management of such of Jehovah’s angels for the resurrection of man of the earth.

I have wondered over the years what cosmic phenomena this was describing and whether it had a basis in modern astro-physics. In my research lately I have found that it does and is very interesting. -Cevorkum, roadway of solar phalanx. a, a, a, lines of different currents; b, b, b, transverse currents. The crossing denote the localities of the highest etherean light. The numbers with their signatures, show the densities through which the great serpent passes each cycle. The lines across the cevorkum denote a cycle of three thousand years, but overdrawn one thousand times in order to be apparent to the eye, i.e., one to 4,700,000

Plate 49 in Oahspe (above image) shows the “Arcs” of Dan as they radiate out through the universe. This pattern is a depiction of a wave interference pattern created on a equatorial plane of a torus. See this link to see these same patterns in the wave convergence lines of the galactic electromagnetic field. (see heading ‘cross section of a torus’) 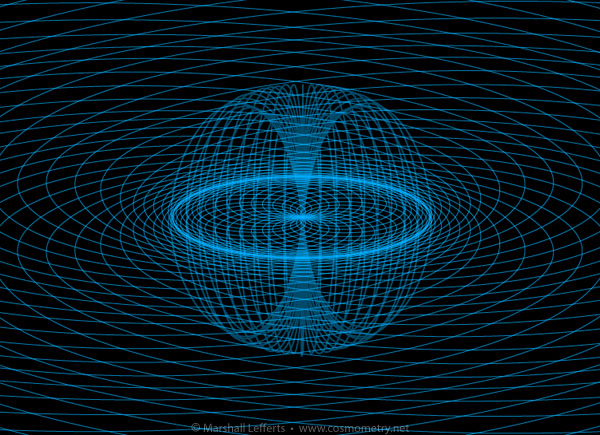 When viewing a double spiral, what we’re looking at is actually the 2-dimensional pattern of the 3-dimensional (and 4D with time as flow process) field of a torus. It is the cross-section of the whole field which itself is double-spiraling around and throughout the torus, as well as along its central axis.

Thus the ‘light of dan’ or periods of dan, actually equate to electric field densities within the galactic plane. This whole philosophy taught in oashpe, that the position of the earth & solar system as it travels through the galactic plane, essentially dictates “righteousness” or “enlightnment” on earth or ignorance and dark ages goes well with what the D&C teaches in section 88. That essentially the power or ‘spirit’ of God is actually the same or at least embedded in electromagnetic energy.

These verses are teaching the same principle that the Law of One (link) goes into such depth explaining. It is a difficult concept to grasp, and even harder to teach but the general idea is that intelligent life in the universe are all connected through the galactic electromagnetic field. Furthermore, all planetary consciousness is unified, and connected to the planet itself through the planets electromagnetic field. And there is a symbiotic relationship between the human group consciousness and the planetary “consciousness” which responds to the laws of physics sent out to it from the galactic core. And that human consciousness is connected to, and is influenced by solar, and especially galactic field density. Basically the galactic core sends out energy through its electromagnetic field, and embedded in this energy is data or intelligence. Thus the density or field strength affects how much ‘spirit’ or more specifically how much energy, light and intelligence humans have. So evolution is quickened by higher field densities and conversely entropy and retrogression is increased by lower field densities. Thus we are “connected” to God or the galactic core through the galactic electro-magnetic field.

Because the galactic core creates an oscillating magnetic filed, as our sun which is essentially a charged particle travels through it, a current is induced within it (see here for physics refreshers). Thus the current within our sun is also greatly affected by our position within the galactic field, and it’s 11 year magnetic field cycle is actually dictated by its position in galactic field. The “lay lines” or magnetic field lines illustrated in the figures above affect the suns intensity and thus the earth. More importantly, because the sun’s magnetic field creates interference waves, the stronger its field strength the less we can interact with the galactic field. This is why solar max, or the period in which the Sun’s field collapses during reversal is so critical to spiritual evolution and galactic space travel. (see Oahspe’s reference’s to 11 yr and 33 yr cycles). It is during the collapse of the earth & sun’s force fields (magnetic fields) that ships can travel to earth, and consciousness can interact with galactic sources. This is the ‘Times of Harvest’ spoken of in Oahspe and the Quarantine spoken of in the Law of One.

So the Arcs or Times of Dan in Oahspe are not stationary lights or planets, they are galactic interference patterns which create nodes that act as convergence points for trans-dimensional communication and travel. This is the “wave” headed toward earth that some new-ager’s talk about (actually earth is heading toward it, as much as it heading toward us). I’m not sure why our convergence with these waves causes a day of light (such as at Christ’s birth), but it likely has something to do with the induction of current in our ionosphere. Perhaps it essentially creates a global aurora because of the intensity of energized particles in the wave convergence.

Talk about how the fractal works? With torus’s created on field lines, embedded in bigger field lines?

04/7.2. || And Jehovah caused the earth, and the family of the sun to travel in an orbit, the circuit of which requires of them four million seven hundred thousand years. And He placed in the line of the orbit, at distances of [aprox] three thousand years, etherean lights, at which places, as the earth passes through, angels from the second heaven come into its corporeal presence. As ambassadors they come, in companies of hundreds, thousands, and tens of thousands, and these are called the etherean hosts of the Most High.
04/7.3. They come not as single individuals; nor do they come for a single individual mortal.

That humans could be seen as the ‘brain’ of the earth. On a higher plane, all planetary intelligence is connected through the electromagnetic field. That what religions refer to as “The Spirit World”, or what Oahspe refers to as “The Atmospherean Heavens” is a unifying plane of consciousness existing within the earth’s magnetic field. To those in our 3rd dimension we see it as a simply an energy field, barely perceptible in comparison to our ‘solid matter’ reality. However, on a quantum level once you understand that ‘solid matter’ is really only reinforcing wave interference patterns, you can see how by simply shifting one’s resonance, you can jump up a dimension what we perceive/measure as etheric electromagnetic fields from the perspective of our current dimension are actually ‘solid’, ‘material’ worlds in another dimension.