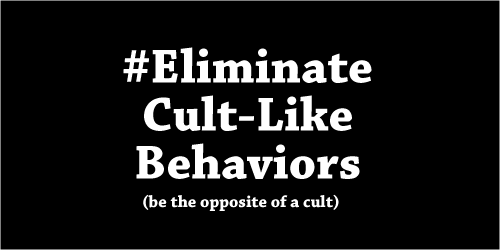 The word “cult” typically has a fairly derogatory meaning. So most of us Latter-day Saints really take offence to those who stigmatize our religion with this label.  On my mission I was simply baffled by how so many other Christians could call us this with real concern.

It wasn’t until years later when I started looking at the practices of fundamentalist organizations (like the FLDS under Warren Jeffs in Colorado City) that I began to see what so many protestants and even Catholics were referring to when they called us a cult.  Its very hard for us LDS people to see these errors in ourselves, but we need to study what is wrong with organizations like North Korea, The FLDS, Scientology or other “cult-like” organizations… and stop being like them in the subtle ways that we are.

In one sense a cult is simply “a system of religious beliefs and ritual; also : its body of adherent“. By that definition, every religion is a cult. But what I (and most the world who call us this) are talking about is another definition. One that deserves the derogatory association it has. It is “a misplaced or excessive admiration for a particular person or thing” especially misplaced faith and/or admiration of a charismatic leader leading to some level of psychological enslavement. As in a personality cult.  A cult in this essence is a dictatorship of sorts, where the leader or leadership has convinced a body of adherents into adoring and upholding them using manipulation. Really it boils down to leaders holding more control than they rationally deserve. Control based on physical force, or on psychological manipulation. (For example, ‘you should obey me because God told you to, or because I have mystical powers, or because your eternal soul is at stake, or because I have a divine mantle, not because I have rational evidence to support what I believe God’s Spirit has taught me.)

This is why closed dictatorships like North Korea and many other similar governments of the past are usually called “personality cults”. Many of the masses in these systems absolutely adore their leaders. In fact they are fanatically loyal to their leaders in psychologically troubling ways, because that loyalty has less to do with what their leaders have actually done for the society personally, and more to do with a culture of manipulation and indoctrination which trains children from a very young age to see and consider their leaders as divine with mystical qualities out of reach for the general masses. To understand the troubling ways Mormonism behaves like a cult, (and the things we should change) simply read this list and watch these videos on known personality cults and then compare them to Mormonism and then a respectful and intelligent discussion on what might need to change can begin. Another good starting point is the article The Priesthood of God & Its Relationship to the Only True Church Doctrine, which gives a scriptural basis on why Mormonism should not maintain power or authority by virtue of its priesthood.

Here are some warning Signs that your in a Cult, From the Cult Institute.

I lay a thorough theological and scriptural foundation for reforms concerning cult-like behaviors in my article, The Priesthood of God & Its Relationship to the Only True Church Doctrine.

The remainder of the reform steps outlines in the ‘needed reformation’ section of this site outlines ways to eliminate the unscriptural, cult-like practices which have crept into Mormonism from its earliest days.

What’s your polygamy? Lance Allred speaks in a TED talk about his experience growing up in an FLDS cult in Montana.  One of many modern FLDS cults which simply carry on the polygamous system created by Joseph Smith and lived by mainstream Mormonism until the United States Federal government forced its abolition.

If the LDS church were a government, and its leaders held political power as well as religious power (as we assume they may some day), what would it look like? It may be hard to nail down exactly, but we know it would be autocratic (absolute top down governance). And it would have very little transparency in its finances and in the inner workings of the top most leaders. North Korea has been changing rapidly since Kim Jong-Un took control, but it strikes me as strangely similar to Mormonism…

Much like with Mormonism, North Korea’s “order” and righteousness come at a great cost. The facade of happiness and beauty hides the sinister shadow of those who don’t conform. The non-conformists are dealt with strictly, harshly and often without mercy. Some documentaries demonize North Korea and its history, others paint it as misunderstood and benign. Whats the correct view?  I guess it depends on your perspective.

What is it that makes this Islamic cult creepy? Its the sneeky suspicion that these “happy” ladies aren’t actually thinking fully for themselves. Much like the North Korean’s there’s a feeling that someone has manipulated them in a way the robs them of their human right to full self determination (free agency).

I’m not saying Mormonism is just like any of these organizations. I am saying that Mormonism shares incredible similarities with them. And if there are things that seem “cult-like” and unnerving as you watch these videos… then make sure Mormonism isn’t like that… and if it is, work to change it. In my view that starts with eliminating the unscriptural autocratic governance system that has developed within Mormonism.

As previously mentioned, the remainder of the reform steps outlines in the ‘needed reformation’ section of this site outlines ways to eliminate the unscriptural, cult-like practices which have crept into Mormonism from its earliest days.