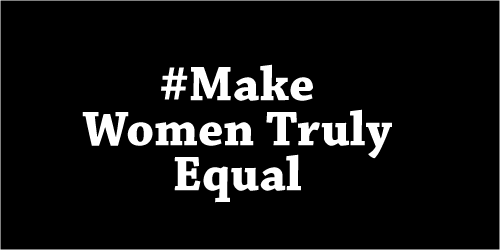 Women don’t necessarily need the LDS priesthood to be equals in Mormonism.  But they are certainly not equal at present, and major changes are needed to bring gender equality to the church.

To suggest that women are somehow “different but equal” in the LDS church at present… is like pretending that women in the united states were “different but equal” even though they were barred from every LEAD position in politics.  Like saying they were equal because they could sit on City Councils and many auxiliary government positions, but were barred from being president, barred from being in the president’s cabinet, bared from congress, the house and supreme court as well as from being governor or even mayor.  To pretend that THIS is equality… is a sham.  And to do it in God’s name and say it is the will of God that women be barred from top leadership and virtually all the most important decision-making callings is blasphemy.

It’s understandable that because the Church and much of the Western World’s economic & political structures were CREATED BY MEN FOR MEN in environments of intense battle & natural selection, that women would have been largely excluded in the formative periods of these institutions. BUT WHEN THE WOMEN IN A SOCIETY GAIN THE SAME LEVELS OF EDUCATION AND FREE TIME AS MEN, ITS TIME TO CHANGE THIS.

The LDS church should follow the temple’s lead of making the women priestesses with their own priestess organization. I think this was the idea from the beginning and why it’s in the temple ceremony.  Joseph Smith was incredibly progressive, and perhaps now the the church might be ready for what he envisioned, we should take some leaps. Women should be allowed to ordain their youth into that female priestess organization.  And their leadership structure should be equal to men’s (at least in developed areas of the church).  I’m sure if the church would simply open their hearts to the justice of equality, the Spirit would lead us to a structure & label that would satisfy everyone, in the same way the spirit slowly led the church to give those of African decent the priesthood (something which was wrong to bar them from in the first place–even if the demand for black priesthood holders was minuscule during that time period).

As one looks at the history of brutal warfare that marked the advance of civilization it’s fairly obvious why the physically strong ended up being ‘naturally selected’ to rule and hold power. It’s also obvious why social leaders, religious leaders and the divine would have had men start and run religions in their formative periods. As also why it was so important to shelter women to assure the survival of a clan’s future generations. But that time has past in the civilized world and the church needs to heed the Spirit which has pervaded the nations in showing that today is a time for complete gender equality in civilized regions of the world. The church would do well to understand the meaning of the following scripture and work to assure its fulfillment before God steps in and fulfills it in ways we do not like.