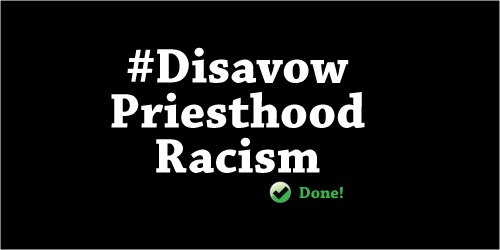 With the recent Church Essay regarding Blacks and the Priesthood, this reform is now done! (although the church still needs to apologize and explain the incorrect scriptural interpretations which were used to justify the racism)

The official position and doctrine of the church going from Brigham Young to Spencer W. Kimball, can be summed up in the following letter from the First Presidency in the 1960’s.

This attitude was based on a particular interpretation of both LDS, Christian and Jewish Scripture.  It was the official “doctrine” of the church, and was based on many quotes spoken “as a prophet” such as this one from Brigham Young.

If there never was a prophet, or apostle of Jesus Christ spoke it before, I tell you, this people that are commonly called Negroes are the children of old Cain. I know they are, I know that they cannot bear rule in the priesthood, for the curse on them was to remain upon them, until the residue of the posterity of Michal and his wife receive the blessings, the seed of Cain would have received had they not been cursed; and hold the keys of the priesthood, until the times of the restitution shall come, and the curse be wiped off from the earth, and from Michael’s seed. — Brigham Young, Feb, 5, 1852

After listening to a Brigham Young speech in the Tabernacle, Wilford Woodruff records the following Brigham Young quote in his journal:

“If any man mingles his seed with the seed of Cane the only way he Could get rid of it or have salvation would be to Come forward & have his head Cut off & spill his Blood upon the ground. It would also take the life of his Children.”
-Brigham Young  (1852, Wilford Woodruff’s Journal, Vol. 4, p. 97)

These attitudes were likely derived and certainly upheld by an incorrect interpretation of LDS scripture. LDS leaders did not recognize that accounts in the pearl of Great Price describing the curse of Cain & Ham were not revealed in order to justify some kind of continued belief in this curse, but as a needed backstory to help modern people understand the basis for ancient Jewish racism.

The truth is, that ancient Jews, along with many ancient peoples were racist.  Galatians 2, is only one of many examples showing the feelings of racial superiority of Jews over gentiles. The entirety of the Old Testament is an account of the Jews rejecting Moses invitation to be reconciled to God on Mount Horeb, and instead being given up to a “lower law” and “preparatory priesthood” run by lower rulers and lower rules of conduct.

23 Now this Moses plainly taught to the children of Israel in the wilderness, and sought diligently to sanctify his people that they might behold the face of God;

24 But they hardened their hearts and could not endure his presence; therefore, the Lord in his wrath, for his anger was kindled against them, swore that they should not enter into his rest while in the wilderness, which rest is the fulness of his glory.

25 Therefore, he took Moses out of their midst, and the Holy Priesthood also;

26 And the lesser priesthood continued, which priesthood holdeth the key of the ministering of angels and the preparatory gospel;

In my article “Oh ye fair ones: The implications of racism and genocide on Book of Mormon DNA evidence“, I show how the entirety of the Bible and Book of Mormon are history lessons, showing modern Israel the errors of the past, and exhorting us not to make those same mistakes.  I show how it was the systemic continued racism of the Nephites against the darker skinned Lamanites which eventually led to the wholesale genocide of the whiter Nephite people (largely Nephites who held to Israeli purist doctrine, maintaining their “fair” complexion) by the darker Lamanites (compose largely of darker skinned natives wrongly thought to be “cursed” Lamanites along with a smaller faction of mixed-race Lehite decedents and dissenters).

But instead of seeing and learning from the important lessons being taught in the Book of Mormon racism along with its explained racist foundations revealed in the Pearl of Great Price. Early LDS leaders simply fell into the same mistaken sins as these ancient Jewish people.  And, of course, the Book of Mormon explains this is part of the test given to the latter-day Gentiles.

9 And when they shall have received this, which is expedient that they should have first, to try their faith, and if it shall so be that they shall believe these things then shall the greater things be made manifest unto them.

10 And if it so be that they will not believe these things, then shall the greater things be withheld from them, unto their condemnation.

However, the invitation is extended to repent of this wickedness and work to restore the wrongs of the past in order to be numbered with Israel at the end of the Times of the Gentiles, when the gospel is taken from the fair skinned Gentiles of Europe and its colonial outposts, and is returned to the Muslims of the Middle East, the Latins of the America’s and of course the elect of Israel scattered densely among those of African heritage.

Plural Marriage in Kirtland and Nauvoo (notes on the LDS Gospel Topics Essa...
Scroll to top